I’ve written at length about Monkey’s staff, armor, golden headband, and tiger skin kilt, but the one thing that has puzzled me the most is the origin of his magic hair. His ability to create anything he wants from his fur first appears in chapter two when he is forced to fight a demon who has taken control of his Water Curtain cave in his absence.

Seeing that his opponent was growing fiercer, Wukong now used the method called the Body beyond the Body [shen wai shenfa, 身外身法]. Plucking a handful of hairs from his own body and throwing them into his mouth, he chewed them to tiny pieces then spat them into the air. “Change!” he cried, and they changed at once into two or three hundred little monkeys encircling the combatants on all sides [fig. 1]. For you see, when someone acquires the body of an immortal, he can project his spirit, change his form, and perform all kinds of wonders. Since the Monkey King had become accomplished in the Way, every one of the eighty-four thousand hairs on his body could change into whatever shape or substance he desired (Wu & Yu, 2012, p. 128). 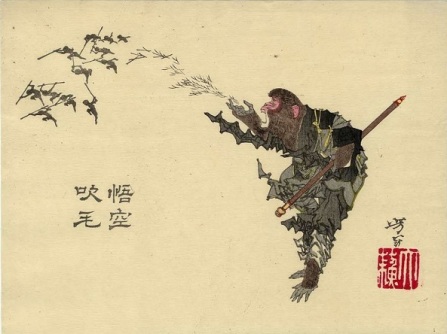 I was pleased to find the answer while finishing work on a recent article. The following material appears in Meulenbeld’s (2007) wonderful study on Sire Thunder:

This peculiar technique was not an invention of the author of Xiyouji; it existed in ritual practice as performed by Daoist priests to produce martial proxies. In an example from the late fourteenth century [the Song Lian quanji, 宋濂全集], recorded by Song Lian, we read about a certain Daoist that his “steps of Yu formed a Heavenly Paladin, pulling out hair to make soldiers” 禹步成罡, 拔髮為兵. A ritual manual from the Heavenly Reed tradition [the Daofa huiyuan, 道法會元], written at least one and a half centuries before Xiyouji (and probably much earlier even), mentions that in the practice of summoning forth divine troops “the spiritual agents, generals and scribes come out through the pores” 靈官, 將吏, 自毛竅出. Consistent with the Golden Glow of self-incineration practices I have described in chapter 3, the pores could radiate with the same Golden Glow, and make the gods manifest: “From all the holes and pores in the body of down and hair burst forth ten-thousand rays of Golden Glow; […] the ten-thousand gods all manifested themselves inside this Golden Glow” 一身毛髮孔竅都迸出萬道金光 […] 萬神俱現於金光中. In Daoist literature generally, the pores were regarded to be the “source of transformations” 造化之源 (pp. 294-295).

As previously stated, the novel refers to Monkey’s ability to make clones of himself as “the method [of] the Body beyond the Body” (shen wai shenfa, 身外身法). Interestingly, this corresponds to a similar sounding name for the immortal embryo that a Daoist adept cultivates within themselves in an effort to create an immortal spirit body. Pregadio (2018) notes that, once gestated to maturation and freed to roam, this embryo-turned-immortal spirit is called the “person outside one’s person” or the “self outside one-self” (shen zhi wai shen, 身之外身) (p. 400). Above, I cited Meulenbeld (2007) who described a ritual in which a Daoist creates heavenly paladins by plucking out hair. Monkey instead creates magic clones of himself and sends these autonomous beings out to do his bidding, much like an advanced practitioner might send out their immortal spirit body. So it appears the author-compiler of Journey to the West mixed and matched various Daoist concepts to create some of Sun Wukong’s magical abilities.

Body division (fenxing, 分形) is a common skill of the Daoist sage (Robinet, 1979, p. 49). Daoist hagiography mentions several practitioners able to divide themselves in order to simultaneously entertain multiple guests or answer the numerous summons of lofty officials. The most famous example is that of the late Han alchemist Zuo Ci (左慈), who is known for enraging the warlord Cao Cao (曹操) and using his body division power in hilarious ways to escape capture and execution time and time again. Part of his story reads:

<Inquiries determined that Zuo Ci had returned home. Duke Cao was now even more determined to have him killed, and he also wanted to test whether Zuo could avoid death, so he gave orders to have him apprehended. [As Cao’s men approached,]> Zuo ﬂed into a ﬂock of sheep, and his pursuers, losing sight of him, suspected that he might have transformed himself into one of the sheep. They had the sheep counted. Originally there had been an even thousand of them, but now there was one extra, so they knew that Zuo had indeed transformed himself. They announced: “Master Zuo, if you’re in there, just come out; we won’t hurt you.” Then one of the sheep knelt down and spoke words, saying, “Who would have thought I’d be pardoned?” When the pursuers tried to seize that one sheep, all of the other sheep knelt down and said, “Who would have thought I’d be pardoned?” So the pursuers [gave up and] left.

<Later on, someone learned Zuo Ci’s whereabouts and informed Cao, who once again sent men to apprehend him, and they captured him. It was not that Zuo could not have escaped; he deliberately allowed himself to be arrested in order to demonstrate his divine transformations. He was taken into prison. When the guards there were ready to torture and interrogate him, there was one Zuo inside the cell door and another Zuo outside it, and they did not know which one to torture. When Cao was informed, he despised Zuo even more, and ordered that he be taken out of the city and killed.> As they were taking him out of the city, Zuo suddenly vanished. So they locked the city gates and searched for him. It was announced that [they were searching for a man who] was blind in one eye and wearing a linen cloth wrapped on his head and a one-layer gown. The moment this announcement was made, the entire city full of people, numbering several tens of thousands, all turned into men blind in one eye wearing a linen cloth on their head and a one-layer gown [fig. 2]. So in the end they did not know which one to seize.

<Cao then put out an all-points order that Zuo Ci was to be killed on sight.> Someone saw and recognized Zuo, so they beheaded him and presented [the head] to Cao. Cao was overjoyed. When he inspected the head, however, it turned out to be only a bundle of straw. <When someone went back to search for Zuo’s corpse, it had vanished (Campany & Ge, 2002, pp. 280-281).

Fig. 2 – An entire city of Zuo clones (larger version). From a modern Romance of the Three Kingdoms comic.

Zuo and Monkey share a cheeky talent for taunting their enemies with magic transformations. It’s important to note that, while this particular hagiography appears in Traditions of Divine Transcendents (Shenxian zhuan, 神仙傳, c. 4th-century), a later adapted version appears in chapter 68 of the Chinese classic Romance of the Three Kingdoms (Sanguo yanyi, 三國演義, 14th-century).

Additionally, Robinet (1979) describes a form of body division in which Daoists create miniature clones to do their bidding, much like the monkeys called forth from Sun’s magic hairs:

The Taoist encyclopedia, Yunji Qiqian [雲笈七籤, c. 1029], sets forth three similar methods, all of which involve the creation of a human simulacrum (yingren 影人 [lit: “shadow person”]) by means of mental concentration. Such figures, only several inches tall, can pass through walls and ascend to the heavens. They are substitutes for the Taoist himself, acting as representatives for him so as to roam the heavens and secure beneficial influences for him. They infuse these influences into the adept’s body where they proceed to the major organs (p. 49). [1]

This information shows that body division appeared in religious and vernacular literature prior to the publishing of the Ming Journey to the West. This means the novel’s author-compiler could have drawn from such media to influence Monkey’s powers.

Campany, R. F., & Ge, H. (2002). To live as long as heaven and earth: A translation and study of Ge Hong’s traditions of divine transcendents. Berkeley: University of California Press.