At the end of chapter 100, Tripitaka and his disciples are elevated in spiritual rank as a reward for their hardwon quest to retrieve scriptures from India. Pigsy becomes an altar cleaner, Sandy becomes a Luohan (Buddhist saint), and the priest and Sun both become Buddhas. This paragraph describes what the Buddha says to Monkey upon his ascension:

“Sun Wukong, when you caused great disturbance at the Celestial Palace, I had to exercise enormous dharma power to have you pressed beneath the Mountain of Five Phases. Fortunately your Heaven-sent calamity came to an end, and you embraced the Buddhist religion. I am pleased even more by the fact that you were devoted to the scourging of evil and the exaltation of good. Throughout your journey you made great merit by smelting the demons and defeating the fiends. For being faithful in the end as you were in the beginning, I hereby give you the grand promotion and appoint you the Buddha Victorious in Strife” [Dou zhangsheng fo, 鬥戰勝佛] (Wu & Yu, 2012, p. 381).

Despite this promotion, Sun still dreads the magic golden headband might be used on him. But he soon learns the heaven-sent punishment has disappeared once he became an enlightened being, denoting the internalization of self-restraint:

As the various Buddhas gave praise to the great dharma of Tathagata, Pilgrim Sun said also to the Tang Monk, “Master, I’ve become a Buddha now, just like you. It can’t be that I still must wear a golden fillet! And you wouldn’t want to clamp my head still by reciting that so-called Tight-Fillet Spell, would you? Recite the Loose-Fillet Spell quickly and get it off my head. I’m going to smash it to pieces, so that that so-called Bodhisattva can’t use it anymore to play tricks on other people.”

“Because you were difficult to control previously,” said the Tang Monk, “this method had to be used to restrain you. Now that you have become a Buddha, naturally it will be gone. How could it be still on your head? Try touching your head and see.” Pilgrim raised his hand and felt along his head, and indeed the fillet had vanished (Wu & Yu, 2012, pp. 382-383). 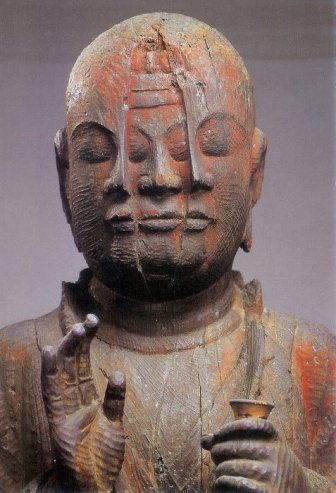 I’ve always wanted to create a piece of digital art portraying Monkey’s ascension and loss of his headband but never knew how to depict both events in the same picture. That is until a few days ago when I came across a beautiful 12th-century Japanese wooden sculpture of the Chan Buddhist monk Baozhi (Jp: Hoshi; K: Poji, 保志/寶志, 418–514) (fig. 1). The piece depicts “the monk’s face in supernatural corporeal transformation, splitting open to reveal the face of the numinous Eleven-Headed Kannon [Guanyin],” symbolizing his enlightenment (Levine, 2005, p. 72). I felt the statue was the best expression of enlightenment that I’ve ever seen. I later discovered the historical Baozhi was known for his ever youthful appearance, carrying a fanciful staff, and working magical miracles (Robert & David, 2013, p. 98; Ebrey, 1993, pp. 100-102), much like our hero. I therefore knew this piece would be the model from which I’d create my art.

This is the final product created in Photoshop CS6 (fig. 2). The piece is comprised of 15 layers using eight different pictures. It took roughly two days working on and off during free time. The screaming face of the angry immortal splits open, giving way to the serene Buddha beneath. The sparks at the top represent the headband violently snapping open since it is no longer needed. Rays of spiritual light shine from the urna on Monkey’s forehead. 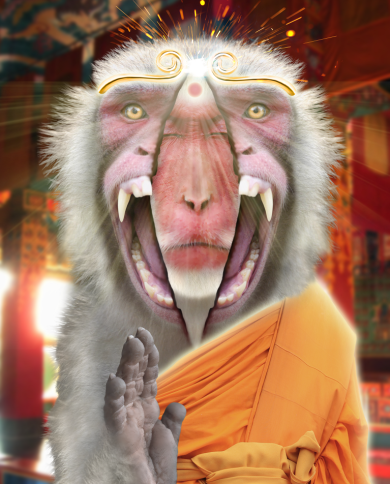 Fig. 2 – The Buddha has Awakened (larger version). By the author.